I was scrolling through this year’s photos this morning and wanted to share a few good ones: 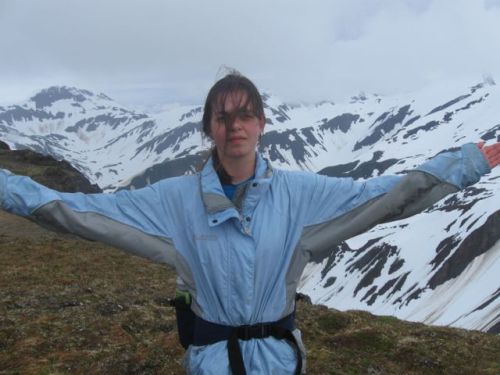 Cecily in Alaska this past summer.

Cecily is my world traveler.  She is so interested in all things cultural and geographic!  She has asked for a world map to hang on her wall for Christmas.  She took a missions trip to Honduras in 2011, and her trip to Alaska with her Dad this summer only served to whet her appetite.  She announced recently that she thinks she might like to go to college in England, and is trying to finish her high school curriculum by the end of her Sophomore year so she can go all the sooner.   She currently studies French and Chinese, and was disappointed that I wouldn’t let her take up Arabic, Gaelic, and Swedish at the same time.  “One at a time,”  I told her.  She can study as many as she wants simultaneously, but she can only begin a new language one at a time.  As second semester approaches, I expect she’ll ask to add one of the others!

This is my good-looking hot tamale, Jesse! Woot, woot!

Perhaps Cecily gets her love of travel from her Dad.  I do love to travel, but Jesse even more so.  He has longed to return to Alaska since he worked there twenty years ago.  Jess wants to see the United States and Mexico, Central America, and parts of Europe.  And he probably will.

We recently took our annual family photo to send along with our Christmas cards.  When we were all done with the pretty smiles we did a goofy face.  I posted it on my personal facebook page and got tons of likes and comments (actually they’re still coming a week later).  I was kind of surprised that it was such a hit.  We almost always take “goofy” pictures after we take our serious poses.  This was after the Mark Mellon Triathlon in July.  Just being our usual goofy selves!  I love having fun with my family!

I’ll admit, I’ve been positively AWOL the past several weeks.  I suspect many of you have been, too.  No one seems to have noticed I’ve been gone anyway.

But in excuse, we’ve been vacationing – first to my uncle’s farm for a Meteor Shower party, then to Traverse City and its outlying areas for the annual Traverse City Triathlon and our last hoorah of summer … vacation.

The illustrious athletes in their wetsuits, about to enter Bowers Harbor in Lake Michigan’s Grand Traverse Bay (L-R: JJ, Jesse, our friend Steve) before embarking on their two hour Olympic Triathlon. They were hamming it up for the camera.  Yes, that is my offspring on the left there, making that hilarious face. No, it’s not my fault.

Jesse was the fourth athlete out of the water after the 1500 meter swim. Out of the transition area, he hopped onto his road bike for the 40 km bike portion of the race. It finished with a 10 km run. Jesse hit his personal best at 1:45.

JJ is leaving the first transition for the bike portion of the race. This was his first Olympic length triathlon and he was thrilled to complete the event! His time was around 2:13. 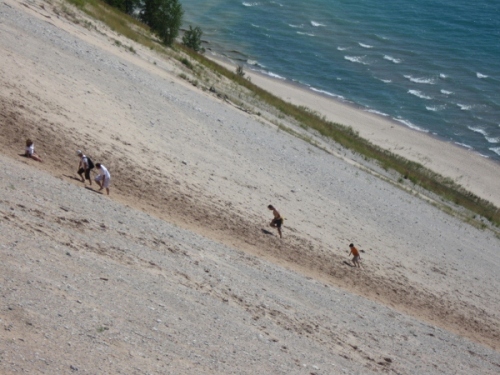 There is a steep drop off to the Lake Michigan shore here at Sleeping Bear Dunes. It appears to be 1/8 of a mile or more down. Jesse and the kids ran down it (or somersaulted in Danny’s case) in about two minutes. They hiked back up it in about an hour. The angle of the climb is about 60-degrees. The two figures on the right are Jesse and Danny.

JJ, Cecily,and I took off to spend one afternoon and evening in Glen Arbor, enjoying some fine food and a great band al fresco. I love spending time with my teenagers! They’re so funny and a lot of fun to be with.

The fam. Vacation time after the race. Looking out at a spectacular view of Little Glen Lake. (L-R: Danny, Cecily, Betsy, JJ and that’s Jesse hiding out behind JJ.)

JJ and Cecily had to drive home early for an event, but we spent our last day with them on the beach with a rented jet ski and a wakeboard, in the west arm of Grand Traverse Bay with Old Mission peninsula to the east and Leelanau peninsula to the west. It was a beautiful day.